EVERY IMAGE YOU'VE SEEN ON METROPOLISPLUS.COM HAS EITHER BEEN RESTORED IN WHOLE OR IN PART OR HAS BEEN CREATED FROM WHOLE CLOTH (e.g., symbols from the Superman's Symbol Page) BY BRIAN G. PHILBIN.

It's difficult to find a good copy of this scene. First, I looked at the original scene from Superboy & The Legion of Super-Heroes #200 - but it was a SINGLE PAGE! This page - and his treatment surrounding it - was the source of Dave Cockrum leaving DC and moving to Marvel, but that's a story for another time.

Here's a decent scan of how it appeared originally:

Not so hot, right? With the printing limitations of the time, this gorgeous scene being relegated to a single page, rather than a center spread was practically criminal. So much detail is lost.

THEN, after Dave Cockrum's departure, DC reprinted it. Much like their printing of character sheets as "Lore of the Legion" in Superboy & the Legion of Super-Heroes #202 and #204, National Periodical Publications (DC) worked to get the most out of Dave Cockrum's beloved work on this team. This was printed in DC Limited Collectors Edition C-49, a tabloid-sized edition of Superboy & the Legion of Super-Heroes, which re-colored and featured this beautiful rendering of the piece as a center spread:

Quite a bit better but, unfortunately, even at a high resolution, the scan turned out pretty grainy, and the coloring suffered due to aging newsprint.

Fortunately, I remembered that there was a reprint in Amazing World of DC Comics #9. Printed on higher quality paper and in black & white. While not as large as the above printing, it was still magazine size (much larger than a regular comic book). So after careful scanning and re-stitching of the pieces, I had a great starting point: 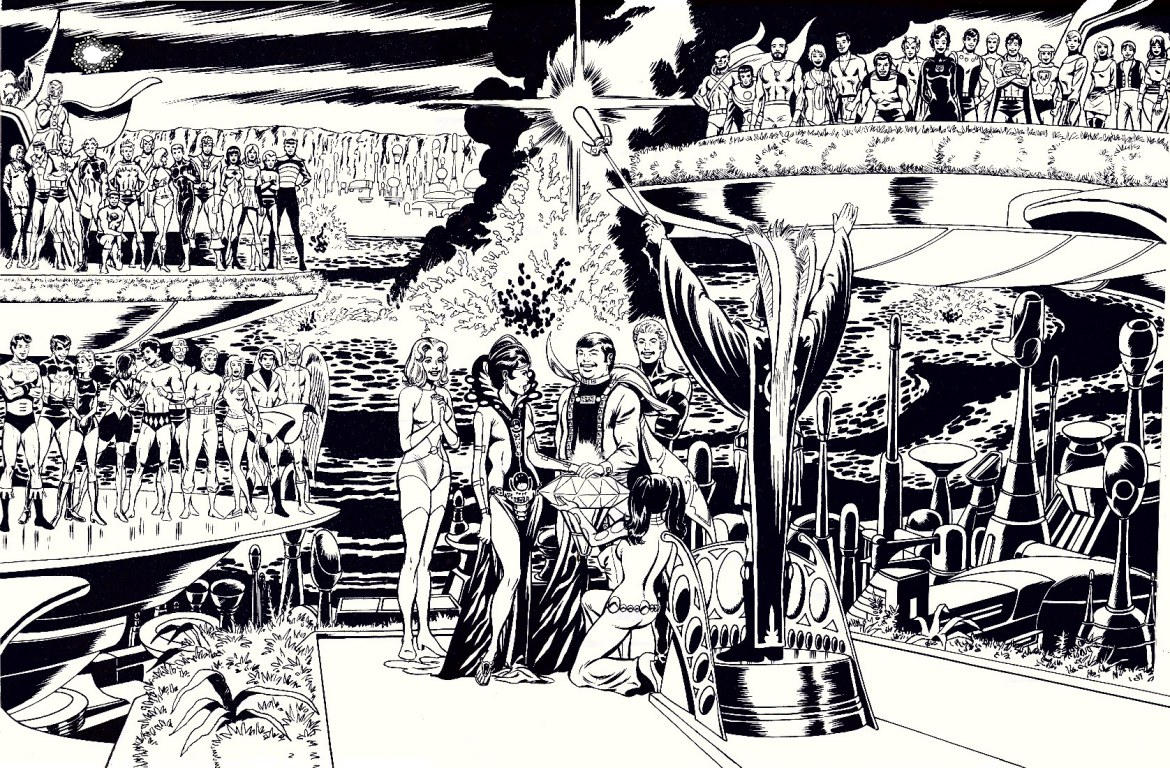 It required minor removal of creasing and the staples, as well, but it provided a lovely piece of black & white art.

Sharp-eyed viewers will notice that the first 2 originally published pieces were truncated versions of the original art. About 5% of the image, immediately to our left of Saturn Girl, was trimmed in order to make the whole image fit, edge-to-edge.

Trouble is, even with the nice image from AWODCC #9, I recognized that the entire image had still not actually made it into AWODCC #9. There was a sliver missing from the right side which featured Evolvo Lad. Slight as his appearance was, I didn't want to leave him out - so I took that sliver from C-49, leached the color out digitally, enhanced the blacks and stitched the sliver in to the black & white piece in order to create a master for my starting point.

After having scanned the black & white image at high resolution, I re-colored it using PaintShop Pro 7.04 (JASC Software, 2001) practically pixel-by-pixel. This was difficult, as well, due to the limitations of the software memory settings.

I also liked the Key to the Wedding Scene on the back cover of C-49, so I scanned it, enhanced it, and included it below.

There were a couple of problems. First, we're on the "red planet" and there's a lot of red in the scene. Not just the planet & sky, or the volcano, but the costumes! So, I pulled some photos of an actual volcano, as well as digital representations of the martian sky to provide a color pallate for those, then used my own interpretation of colors used in characters' costumes (based on those which found their way into print).

Speaking of colors, the plants in the image were colored blue by Liz Berube (also a DC artist in her own right). Reportedly, the idea of possible plants native to Mars being a different color than those on Earth was posited, although whether it was Berube herself who decided on this course, Cockrum (who had substantial investment in the presentation of the image, since he was intent on keeping the original art) or a suggestion by Bates is unknown.

Purples, reds, greens, blues, oranges and even browns, golds & yellows were given some variance to both appropriately represent the characters & the original, as well as correcting errors in coloring from the first & second printings (e.g., Quantum Queen's costume was, and always has been, red, not pink).

So, using the more vivid color pallate we have available to us now, and per a great suggestion from Smitty on PencilJack.com, I've colored the caldera to represent distance. Here's the Wedding of Lourno Durgo to Chuck Taine as it should be remembered: 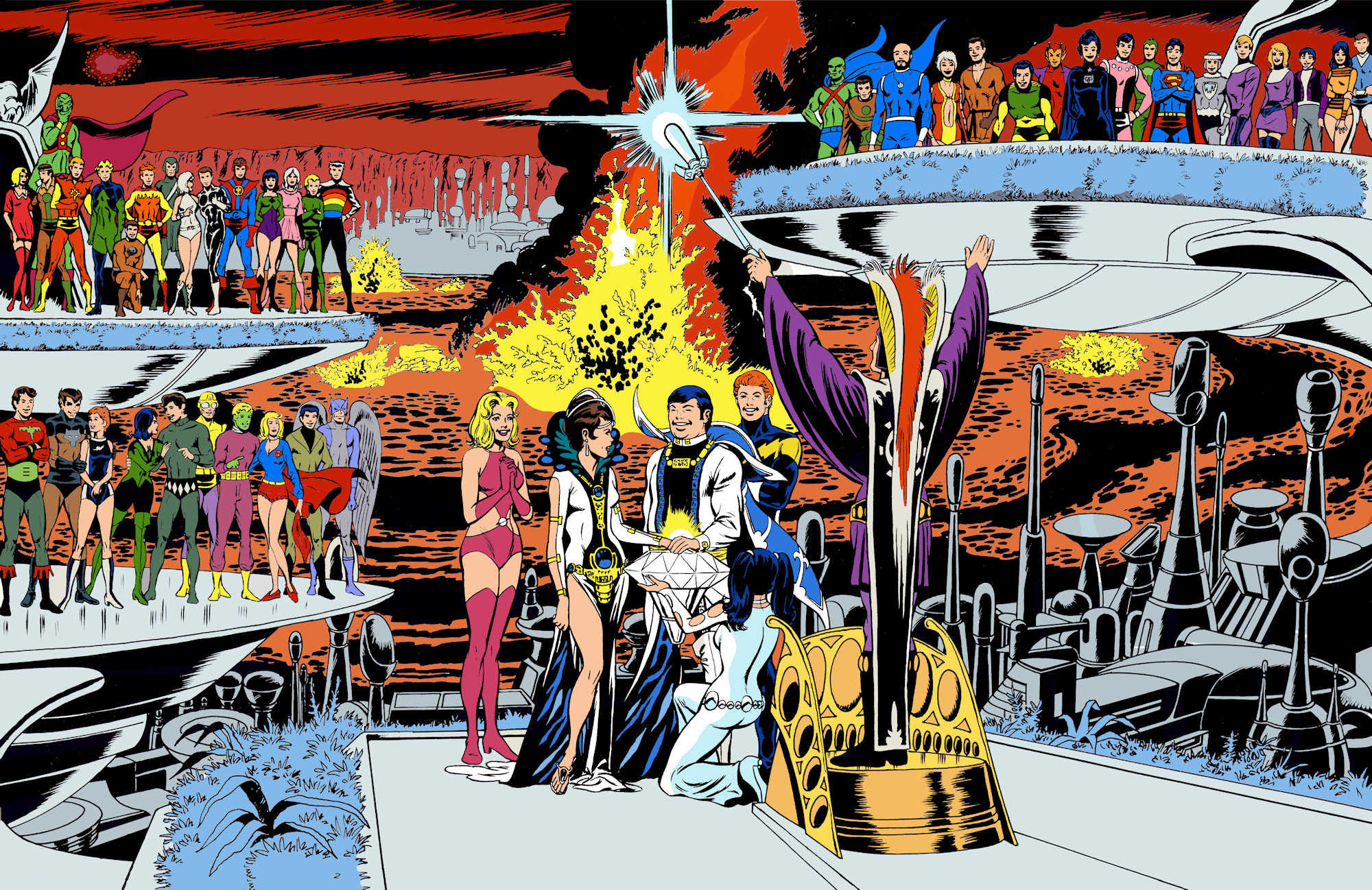 Also, after another great suggestion from ReneA on PencilJack.com - here's the image with the whites adjusted a bit closer to newsprint and represented as if you could actually print high quality repros on that pulpy stock (i.e., tone is dulled just a bit):

AND the Key for your amusement:

Here's another small treat. One of the earliest Dave Cockrum drawings of Superboy was from this Aurora Model scene. Dave drew the accompanying comic - this is the cover, which I restored from a damaged piece of art:

Here are a couple more, which address small concerns I've had. First up is Cockrum's version of the character he created: ERG-1 (Energy Release Generator - a name that Dave said he reeeeeally hated) as he was initially known or Wildfire, as he's been known in the 45-or-so years since. I used the image of him from the splash panel of Superboy & the Legion of Super-Heroes #202, where he was re-named, and combined another panel Cockrum drew of his cool visor with that telltale Cockrum sunburst and lens reflections. No one since Cockrum ever drew him with a curved visor. Usually, there've just been straight lines used to depict it, which I always thought was either weird and inconsistent or not terribly considerate of the character's design.

Also - the only rendition of Ferro Lad by Dave Cockrum (at least, of which I'm aware). It was as a statue in the Hall of Heroes in the background in Superboy & the Legion of Super-Heroes #201 (also featuring the return of ERG-1/Wildfire), so I restored it from a high resolution scan of that page, plus a scan of another, later rendering of the statue gave us the pedestal by Mike Grell & I cleaned up the lettering to make it more legible:

Supergirl was always a favorite character of mine growing up. But, unfortunately, Cockrum only drew her once. In the background. In the wedding image shown above. So - again, I'm not an artist - but I felt that there were enough elements around to cobble together what his version might have looked like. So, using a favorite costume of mine from the period (and opening myself up to ridicule) here's my hopeful "recreation" from five of Cockrum's drawings showing how she may have appeard during that age if under his pencil and pen:

I do so hope this was useful or enjoyable for you in some fashion!

Please take a moment to check out the other sites on metropolisplus.com:


NEW - WITH ONE MAGIC WORD... SHAZAM! THE RESURRECTION OF THE *ORIGINAL* CAPTAIN MARVEL! NEW

All characters mentioned within these pages and associated images are © and ™ of DC Comics, Inc.   If you have any questions, comments or other items of interest concerning this page or DC Comics or what-have-you, please feel free to E-Mail Brian G. Philbin.  All items which are highlighted in blue text and underlined are links to the named item!